This post is written with a heavy heart as I recall a fond memory. Seven years ago I made the costumes below for my parents to wear to a medieval-theme wedding. I’m remembering them again now because my mother passed away a few days ago and I finally had a chance to meet the bride from that wedding during the visiting hours at the funeral home. Mom had been sick for a number of years now but I love how happy and healthy she looks here. And I’ll always be cheerful remembering working on these costumes for her and my dad…

Now for the flashback to December 7, 2006
So… let me tell you a story. Imagine that a couple get invited to a wedding. It’s for a friend and former coworker of the woman and as it turns out, the bride and groom have planned a medieval wedding. And the guests have been asked to come in medieval attire… Wondering where this story is going? Well… your author is the daughter of the aforementioned wedding guests. Yep… Mom & Dad want to dress up for the medieval wedding in January! Did you see that coming because I sure didn’t!

Wondering what’s in store for me? Here’s the plan so far….

After Mom spent hours searching the internet and deciding she liked 14th century kirtles for her costume, we spent an afternoon together recently and went through all the costumes books I could find in the house. I won’t share all the debates we had but ultimately the decision was made to stick to mid-late 12th century costumes for both mom & dad. A bliaut & girdle for her and a tunic-like thing (sorry… can’t recall the correct name!) for him.

Fast forward through several shopping trips to today… Final fabric choices were a faux-dupioni-slubbed-silk synthetic type of fabric in a forest green for the bliaut & matching girdle, a sheer cream fabric for her veil, and a burgundy velvet for Dad’s tunic. Yes… I know these aren’t authentic choices but they are only costumes in this case and the fun will be in the wearing… not in the details!

And I should mention (emphasis on costumes again here) I’m using some patterns from Katherine Strand Holkeboer’s Patterns for Theatrical Costuming to make both ensembles. Not perfect – but they will result in recognizably medieval costumes and that’s all we’re really hoping to achieve in this instance. But… just to make sure I don’t stray too far from the correct designs, a little internet research is in order. Guess I know how my evening will be spent!

This is the sort of plan that we are working from!

December 8, 2006
Huh. Okay… found a few interesting things. Basically how to do it right! This won’t be what I do but it’s interesting reading nonetheless…

That last one had some great pictures of contemporary artwork and I found it somewhat redeeming that my tunic shaped bliaut might not be all bad. Did I mention that we already cut out Mom’s bliaut pieces. One mistake already… there will be a shoulder seam because I forgot to place the top shoulder edge on a fold. However… the gown really needs some trim to liven it up and that will be a good place to add some! So nice to work on ‘costumes’ where there’s a bit of creative allowance!

January 1, 2007
First of all… happy new year! It’s hard to type 2007… it will take a while before that becomes second nature. I have been working on the green bliaut a bit before now but never quite got the time to get pictures up & add my comments. So here’s where I’m at now… Mom came by and we checked the fit of the bliaut – most things were pretty good. I’m a little concerned about the length but some of that will depend on her shoes. Also we had to take the sleeves up a bit and pull them more towards the shoulder. Just too long and rather odd the way they were! We gathered up one of the sleeves – you can see that in the pictures below.

So all of that was done probably two weeks ago and I haven’t touched any of it until today! Wendy, my senior apprentice, was here today and she worked on some of the hemming. Those sleeves are huge and she made a huge dent in one of them. I finished the neckline hemming (finally!!!) and I made up the girdle & belt, too.The girdle is made up of 4 layers – 2 of the green silky stuff and 2 layers of blue linen. Everything was cut on the bias according to the diagram and eyelets were put in along the left and right edges for lacing closed. The curve is deeper along the bottom edge to cover more of the abdomen in front. The top curve will fall just below the bust. 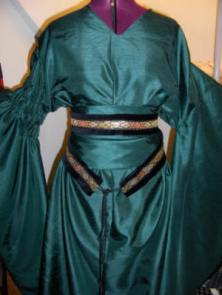 Now tell me that doesn’t look cool!!! Still need to gather other sleeve but I love the way it’s coming along…

The belt turned out to be pretty easy. I had some black velvet so I cut two strips the width of the velvet by about 4″ across. Sewed those together to make one really long strip. Folded the velvet, wrong sides together so that the raw edges overlapped. I placed the metallic trim across the center, covering the raw edges, stitched it down (yes, by machine) and that was that. Knotted up some cording to imitate the drawing and voila! Belt is done… well – for now anyway. Final length will be adjusted at the last fitting. Since I’m tired of writing about this… here’s one more picture and then I’ll move on to Dad’s costume which also got started today!

Sorry… I changed my mind… it’s late and I’m tired of typing! Here’s a quick preview of things to come…

February 16, 2007
Here’s a quick recap… yes, the costumes were completed in time to wear to the wedding. There were apparently a lot of compliments and mom & dad even agreed to let me include some photos…

There’s really not much else to add… I think they turned out quite well! Dad’s costume was basically one piece – just sewn up the sides and along the underarms. Due to the manner of cutting, there wasn’t quite enough to make the sleeves long enough. So I added a band of black velvet, cut some wine velvet from scraps to cover the lower arms and used gold ribbon to cover the seams. That gave me an excuse to bring more gold & black into the rest of the costume. The neckline was faced with black velvet and laced closed with gold cord. A black velvet belt was wrapped in a repeating pattern with more of the same gold cording.

Do you remember the first time you saw the Wizard of Oz? I have to admit, I don’t but when I watch it these days, I still love the part where it goes from sepia-toned Kansas to technicolor Oz! This very sweet Dorothy costume was made for VS, one of my two nieces,  and she’s been looking forward to getting it since last Halloween. She was Rapunzel last year (also way cute!)  and I’m told that even as she was trick-or-treating, she was already telling everyone that she would be Dorothy next time! Well, fast forward 11 months and she was still sticking to her guns. I used the ‘official’ Wizard of Oz pattern by Simplicity so it wasn’t as if I was being particularly creative on this one, but it was still fun to make!

Sparkles. Lots and lots of sparkles. The shoes ended up getting their own bag just to keep the glitter contained!

The only real changes I made were to underline the gingham skirt to give it a bit more body and I added some horsehair braid at the hem to help give the edge a bit more definition. I can’t wait to see it on her! And the best part may very well be the ruby slippers…

I started with some glittery silver shoes from Wal-Mart (ugh… I know) and then painted them with diluted Elmer’s glue before pouring lots and lots of red glitter all over them. The shoes dried for a day or two and then I repeated it again – these things are crazy sparkly now! I used a red glitter glue squeeze bottle to cover the shoe binding – in the photo, only the shoe on the right has been finished so you can still see the original silver binding on the other shoe. They probably won’t be the most comfortable things to wear (they’re a bit crunchy at the moment) but they do look the part… and after all, it’s only for one night, right? 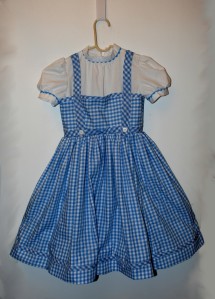 Sweet isn’t it? Makes me want to go watch the movie again…

And until I actually get some photos of the dress on little miss V, here’s a shot of the technicolor version for your viewing pleasure!

For the record, the shoes took a an hour or two over the course of a week, and the dress took about 6 hours, start to finish. I had purchased all the material and notions and even pre-washed the fabric about a month ago, so it was straight to work once I started in on it!

Now it’s off to see the Wizard, the wonderful Wizard of Oz!

Apparently my dear friends, J.C. and M.T. have a thing for pinwheels… or so I learned at their wedding this weekend! Pinwheels – the paper kind – abounded at every corner of the ceremony and reception from programs to outdoor archway to trimming each little wedding cupcake. The wedding itself was beautiful and whimsical, pretty much what you might expect of something carrying a pinwheel theme! This is also why it should come as no surprise that J.C. (the bride) wanted a very ethereal and floaty multi-layered dress that would move in the breeze.

No, she’s not running away – I just took the opportunity to get a shot of the back!

Why should I be so concerned about her dress? Well, as it turns out it was my wedding gift to her in that I made it for her with my own two hands (and my sewing machine. Really the sewing machine gets most of the credit but I’ll take a wee bit, too.) Although, I offered to make a custom dress way back in January, we didn’t actually get together to go over designs and select a fabric until the last weekend in April, roughly 2 months before the wedding date.

The process of selecting the fabric rates its own story (some other time!) but she had her mind pretty well made up by the time April ended. The gown is best described in three parts… Starting at the top: the drape around the shoulders was basically two tubes of the printed fabric gathered off center front and then tacked to elastics over the shoulder and continuing into a wide V-shape at center back. Each piece of the bodice was six layers (hand-basted!) of fabric that were then constructed as if a single layer. Zipper placement was on the side and every seam was boned. The bodice eventually received a lining, too. The skirt was three layers – each layer having 5-7 gores and the hem on each measured between 4-5 yards. The outer layer fabric (for skirt and bodice) was a cross-hatch printed and ombre dyed silk gauze from Banksville Fabrics in Norwalk, CT.  The second layer was a pale grey silk double georgette. The base layer was a white slipper satin. The satin was doubled for the bodice and additional layers of interfacing were also added.

The end result was gorgeous – as was the bride! 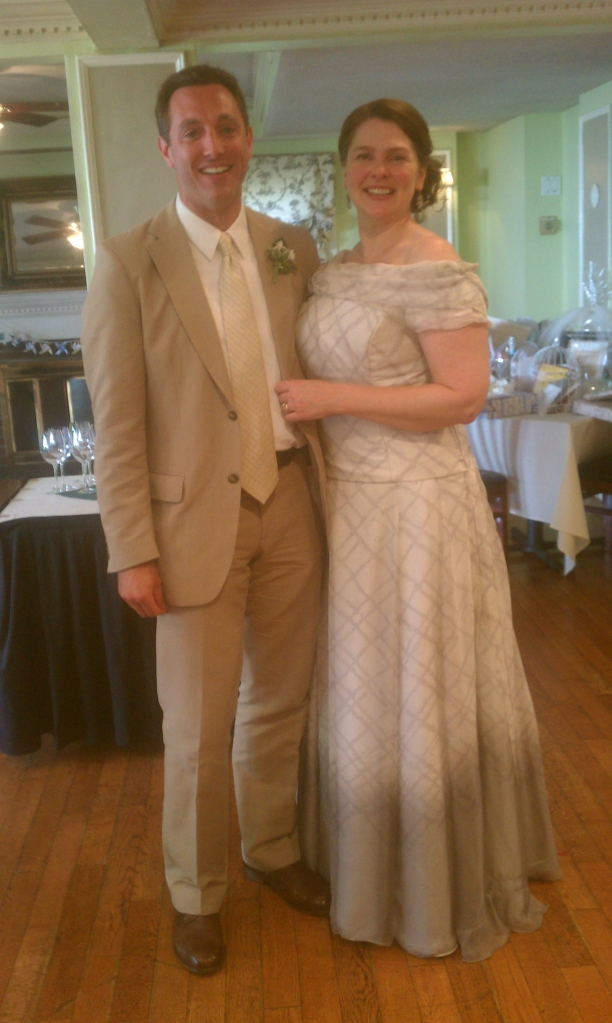 This gown was a labor of love and I’m so honored that she trusted me to create such an important piece for her. Best wishes and congratulations for their future together – love you both!! 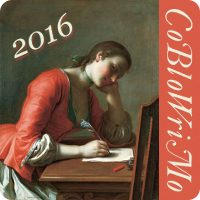